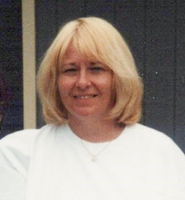 Born in Cleveland, OH on March 1, 1947, Sandee passed away on June 13, 2020, at home in Waterport, NY, surrounded by her family. The 73 years in between were filled with lots of love and laughter, road trips, husbands, cross country moves, rock concerts, books, movies, card playing, and elderly rescue dogs. She was a hardcore Star Wars and Star Trek buff who could still kick your butt at Trivial Pursuit and Jeopardy at the very end. She loved her daughters dearly, her grandchildren more & her great-granddaughters with wild abandon. Christmas was her favorite holiday. So much so that, most years her daughters had to put their foot down and take down her tree in February, and once as late as April. She had the uncanny knack of being able to find anything anyone misplaced. She had a big heart and accepted everyone, collecting a varied group of friends turned family. Her lifelong best friend, "Big Deb," did her best to keep her grounded over the years, but Sandee's wanderlust eventually won out. She couldn't cook anything in quantities smaller than to feed an army, and passed that gift on to her daughters. As in life, she left this earth her way, rocking a head full of lavender hair, while listening to Pink Floyd and Chicago. She was predeceased by her son Ian Iamele, her parents Harry & Dorothy Maus, Jr, and granddaughter Isabella Perrah. She is survived by her daughters Kristin (Luke) Perrah and Bethannie Shortall, her grandchildren Megan Lewis (DJ Allen, Jr), Gabrielle Lewis, Victoria Perrah, and Nicholas Perrah, her great-granddaughters Madeleine, Aislee, and Avalyn, her sister Evelyn Savoie, best friend Deborah (Bernard) Peraino, God-daughters Heather (Dan) and Stacey (Mark), former son-in-law Eugene Lewis, a nephew, nieces, great-nephews, friends, and her trusty furry companion, Casey. We love and miss you so much already, but we'll "see you on the dark side of the moon." Services will be held at the convenience of the family.