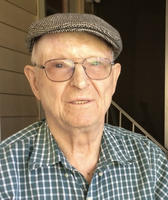 Dear Family and Friends, I am writing to let you know that my dad, George McNeil, passed away peacefully on January 6, 2021 at 90 years of age. George recently moved back to Rochester, NY from the Villages in Florida where he had lived since 2013. George Green McNeil was born on August 2, 1930 in the Goshen Hospital in Goshen, NY. He grew up on a dairy farm with his parents, George and Harriett, along with his younger brother Harold. Bicycles, cars, trucks, tractors, new cars, antique cars; George loved anything with wheels! He was driving tractors on the farm at a very young age. As a frisky teenager, he was involved in two car accidents. I will share one spectacular race George was involved in as reported by the town paper; The winner of an unscheduled "jalopy" race among high school pupils at the Orange County Fairgrounds yesterday, proved to be a loser after all. George McNeil, driver, and Kenneth Slingerland, passenger, both escaped uninjured when the 1933 Ford in which they were riding climbed and broke a power line pole, then fell backward to head in the opposite direction. John Furman, driver of a car that McNeil had just beaten in a half mile run around Henry Clay Oval, said afterward that McNeil's car apparently developed steering trouble after going over a bump at the end of the home stretch. Failing to make the first turn, the car ripped up the outside guard rail and crashed into the pole. 1949, Times Herald Record George started working as a mechanic at sixteen years old after school at the Texaco Triangle Service Station in Middletown, NY. He went on to earn an associates degree from Morrisville College. He served with the Headquarters Battery 68th AAA motor pool in Korea for 17 months. In 1961, George carpooled with other men to his job working on fork lifts at the Ford Motor Company in Mahwah, New Jersey. George was a skilled car mechanic. He had an uncanny ability to diagnose what was wrong with a car. As a student at SUNY Geneseo, I called Dad when my Cougar wouldn't start. He told me to hold the pay phone receiver out the front door, while my husband to be Dick attempted to start the car. Within minutes, he correctly diagnosed the problem. Throughout his life, George assisted many friends and strangers whose car had broken down. He was always the first to volunteer to help someone out. George would retrace his tracks to help someone who needed help. He would stop to help people he saw stranded along the road. Antique car club friends would often ask him for advice. Antique cars or modern cars, George was known as an expert in car repair. Growing up, weekends were often spent combing old barns for specific cars or car parts for sale. Our family would set off for a ride that ended in someone's back yard. I can still remember the damp and musty smell of the many old buildings we walked through. I remember fondly learning how to drive from Dad. George McNeil's daughter would be able to drive any kind of car or truck. I learned to drive standard cars with 3-4 gears on the column, or on the floor. I backed down our driveway using my mirrors hundreds of times. Dad showed incredible patience, kindness, and humor. My first attempt at parking was next to a bush in the back field near our house. George and Betty McNeil were married 60 years before my mom passed away in 2012. He missed her greatly. A highlight of their life together was driving their antique cars on 25 Glidden Tours across the United States. George is survived by his daughter Nancy (Dick) Hendrick, grandchildren Dr. Erin (Greg) Kirkpatrick, Russell (Dr. Jennifer) Hendrick, and great grandson Alexander Kirkpatrick. George loved breakfast. Funeral services are restricted due to Covid but you can help celebrate George's life at your home with a hearty breakfast of pancakes and real maple syrup. Fondly, Nancy McNeil Hendrick and Dick Hendrick nancyhendrick32@gmail.com 585-797-3496