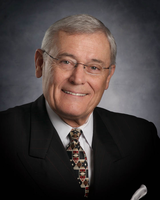 A Rochester native, Bob graduated from Eastridge High School class of 1961. He followed his boyhood dream to become a Funeral Director and graduated from the Simmons Institute of Funeral Service in 1962. For the past 60 years, ever the consummate professional applying his dedication and excellence, Bob cherished being a Funeral Director, and mentor to other Funeral Directors, finishing his career with Harris Funeral Home. He served as past president of the Rochester Genesee Valley Funeral Directors Association where he was honored with the association's lifetime achievement award. A freemason for nearly the past half-century, Bob was a past Master and currently a Trustee in Seneca Lodge #797 F. & A.M. He was a member of the Elks Lodge #24 B.P.O.E. He was a passionate golfer, known to some as 'Ace'.  A dapper gentleman, meticulous with his wardrobe.

Bob Shaver will be forever remembered as a loving father and partner. He was a very wise man with a calm, phlegmatic sense of balance and reason. He was quick with a pun. He was our scrapper.

His family will receive friends Friday, April 30, 4:00-7:00pm at the funeral home (570 Kings Highway So.). On Saturday, May 1st at 10:45am a Masonic Service will be held, followed by a Funeral Service at 11:00am. Interment Holy Sepulchre Cemetery.