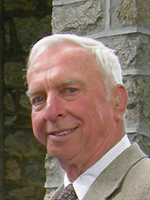 Alban Joseph Reichert, of Havertown, Pennsylvania, formerly of Rochester, New York, passed away on Saturday, April 16, 2022. He was 91 years old. Al was the loving husband of the late Carol (nee Dertinger) Reichert. He is survived by his children, Mark (Michele) Reichert of Ithaca, New York and Maren (Han Nguyen) Reichert of Havertown, and grandchildren Rachael (Joe) Reichert, James Reichert, Khue Nguyen, and Vinh Nguyen. Al was pre-deceased by his siblings, Ursula, Stephen, Margaret Mary, Charles, Ellen O'Connor, and Patricia Treacy. Al was born in Brooklyn, New York to Charles and Ursula (nee Watson) Reichert. He attended Regis High School in Manhattan, St. Michael's College of the University of Toronto, and Villanova University School of Law. He maintained a general law practice in Rochester and later served as a town justice in Irondequoit. With Carol he raised his family in West Irondequoit and was a member of St. Margaret Mary Church. He was active with the Knights of Columbus, the pro-life community, and Alcoholics Anonymous. Following the death of Carol, Al relocated to the Philadelphia area, where his daughter's family lives. He enjoyed taking in the city's cultural offerings and watching his younger grandchildren's youth sports activities. His family will receive friends Thursday, May 26, 4:00 - 7:00pm at the funeral home (570 Kings Highway So.). Friends are invited to join the family Friday, May 27, 10:00 am at St. Kateri At Christ The King Church for his funeral mass. In lieu of flowers an offering to the House of Mercy, 285 Ormond Street, Rochester, NY 14605 or Birthright of Rochester, 320 N. Washington Street, Rochester, NY 14625 would be gratefully appreciated.