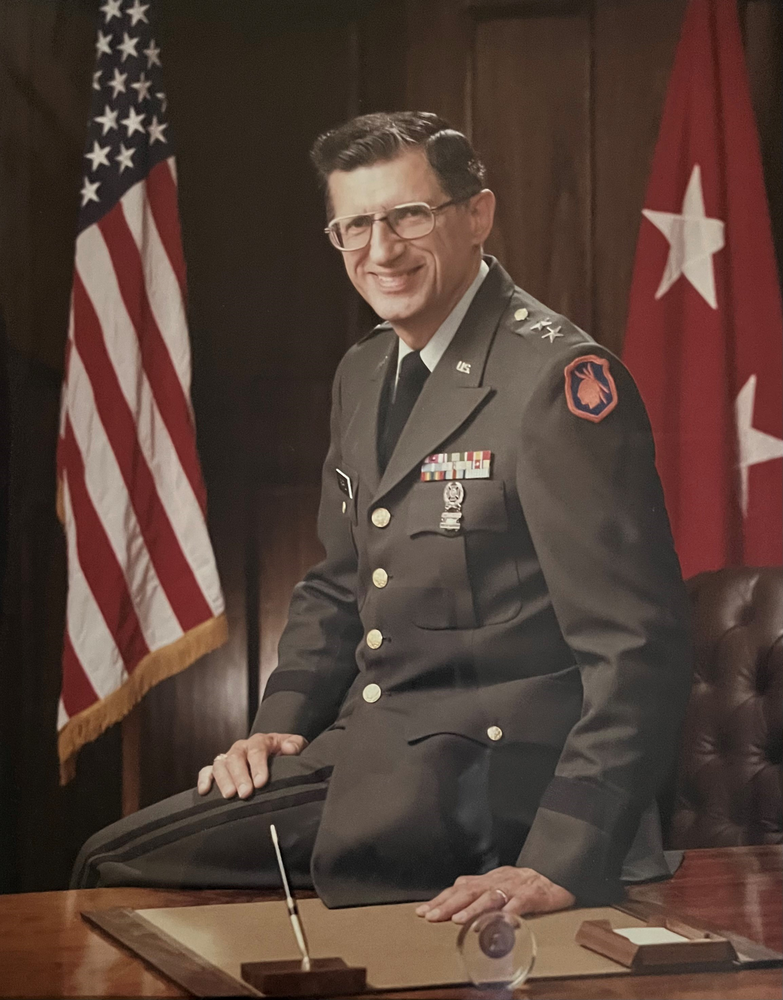 A lifetime resident of Irondequoit, NY who exemplified what it means to be a pillar of the community, a man of faith, and a man with love for his God, family, and country. Age 91. Survived by his loving friend and wife of 69 years, Bernice, children, Carolyn (Edmund) Maier, Laurie (Allan Christensen), Lois (James) Morales, Gail and Gary, grandchildren, Dustin, Kyle and Karl Morales, and sister Katherine, RSM. Predeceased by parents, George and Mary Rappl and sister, Marion, RSM.

Norbert graduated from Aquinas Institute in 1948 and from St. Bonaventure University in 1952 where he was commissioned in the U.S. Army. A veteran of the Korean War, he joined the US Army Reserve upon being released from active duty in 1954, graduated from the Army War College in 1976 and rose to the rank of Major General, commanding the 98th Division, the pinnacle of a 35 yr military career. A founding member of Christ the King Church he served as Parish Council President and Trustee. A man of great faith he held almost every lay position in Christ the King and St. Kateri Parishes at one time or another and was a daily communicant for many years. He was a charter member and Past President of Irondequoit Rotary. He was President of concrete block manufacturing and building material supply firms Rappl & Hoenig Co., Inc. and Comac Builders Supply Corp. and served as Chairman of the Board of the National Concrete Masonry Association, the New York State Concrete Masonry Association, and the Builders Exchange of Rochester. He was a member of the Rochester Yacht Club, Irondequoit Post 134 of the American Legion, the Korean War Veterans Association, Reserve Officers Association, the Association of the United States Army, the Military Officers Association of America, past President of the Department of New York Reserve Officers Association and a U.S. Army Reserve Ambassador.

His family will receive friends Wednesday, March 23, 3:00 pm – 7:00 pm at the Funeral Home (570 Kings Highway So.). Friends are invited to meet the family Thursday, March 24, 10:00 am at St. Kateri at Christ the King Church for his Funeral Mass. Full Military Honors and Interment will take place in Arlington National Cemetery at a later date. In lieu of flowers, donations may be made to St Kateri for Masses to be said in Norbert's name, 445 Kings Hwy S. 14617 or to your own parish.

98th Division Band designated “Rappl’s Own” by Department of Heraldry

Record of Civilian Employment and Accomplishments

Former Chairman of the Board, Executive Committee and Board of

Past President and Board of Directors, Concrete

Former Chairman of the Board and Board of Governors, Builders Exchange

Board of Directors, American Red Cross

Former Chairman of the Board, Fair Business Council of Rochester

Board of Directors and Secretary, Better Business Bureau of Upstate New York

Board of Directors, Chamber of Commerce

Committee, Employer Support of the Guard and Reserve,

Founding Member and Past President, Rotary Club of Irondequoit

Senior Lector and Server, Christ the

Reserve Officers Association of the

Association of the Army

Welcomed every Honor Flight since 2008

Walked 5 miles a day for decades around Irondequoit

Gone from our touch but never our hearts.

All our love always,